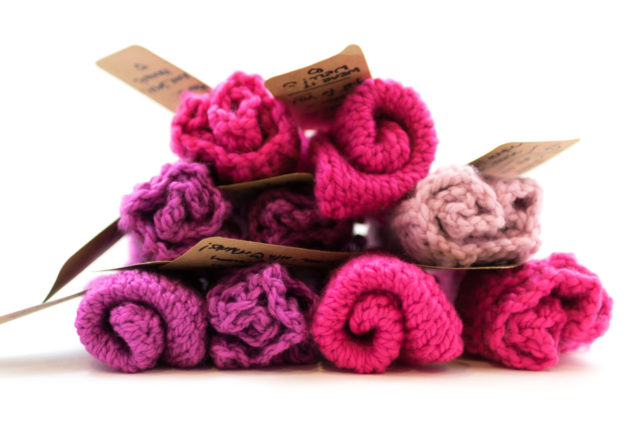 If so, there’s still time to make a pink pussyhat to wear on Saturday at the Women’s March on Washington or at one of the more than 600 sister marches happening across the country.

The official pattern — the Pussy Power Hat by Kat Coyle — is easy (it’s essentially a rectangle folded in half) and available to download for free. Experienced knitters can probably knock one out in an hour or two. There are also alternative patterns on the Pussyhat Project website; the hats that call for chunkier yarn will take even less time to make.

Because it’s been years since I picked up a pair of knitting needles, I asked my mom if she’d make me a kitty hat for the march. We stopped at her local knitting store when I was in NJ last weekend so I could choose the yarn, and to my amazement, there were only three skeins of pink yarn left in the appropriate weight.

A saleswoman informed me that many of their customers have been busy knitting pussycat hats. Half plan to wear them at a march and the other half have sent them down to DC for other marchers to enjoy. While we were there, an 80-year-old woman was sitting at the store’s communal table knitting one to donate.

Before I settled on a skein of yarn, I called the knitting store in a nearby town to check on their inventory. I had my heart set on a Loopy Mango pattern that called for very chunky yarn. Would you believe that they were also nearly wiped clean of pink yarn, too? The only option they had left was a glittery one.

Last week, there was a column in the Washington Post criticizing the idea of The Pussyhat Project:

Pink pussycat hats, sparkly signs, color-coordinated street theater — all of it is gleefully in the works for the upcoming Women’s March on Washington on Jan. 21. And that scares me a little. Because all of this well-intentioned, she-power frippery can make this thing more Lilith Fair than Lilly Ledbetter. And the Women’s March of 2017 will be remembered as an unruly river of Pepto-Bismol roiling through the streets of the capital rather than a long overdue civil rights march. This is serious stuff . . . . The Women’s March needs grit, not gimmicks.

Reading the piece, I began to feel silly for wanting a pink pussyhat. 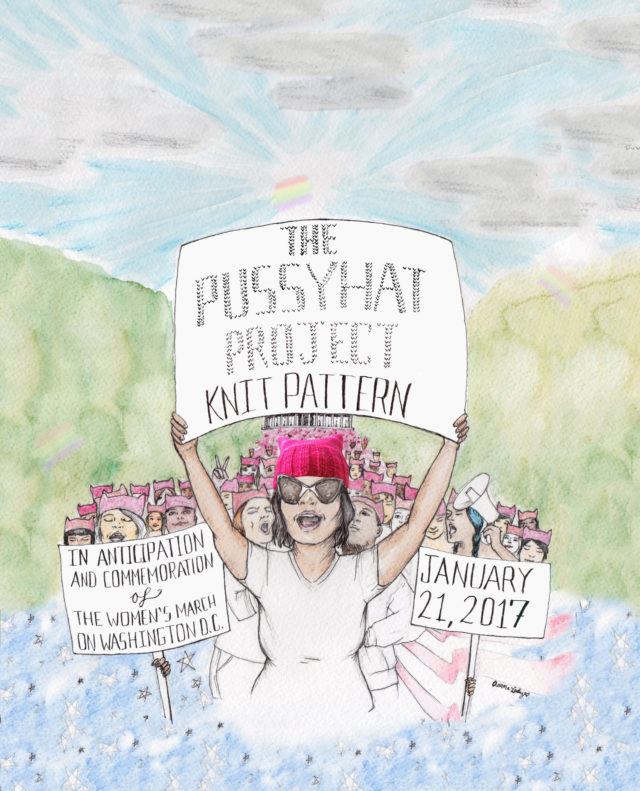 However, after witnessing firsthand just how many women are eagerly participating in The Pussyhat Project (and later learning from a friend that the Michael’s near her home in Oregon had also sold out of pink yarn!), I felt a sudden sense of pride. No, wearing a pink hat with kitty years isn’t going to directly influence any policies on equal pay or reproductive rights. And yes, we will look like a river of Pepto-Bismol as we parade down DC, but that’s exactly the point. It’s about the visual statement, according to the website:

Moreover, the pink pussyhats provide an opportunity for the people who aren’t able participate in any of the marches to be represented and to show solidarity in the movement for women’s rights.

So, go ahead. Knit, crochet, or sew a pink hat — if you can still find the yarn.

Here are a few interesting tidbits from The Pussyhat Project mission statement:

Why cat ears? As a big “Fuck You” to our new president, who was, as you’ll remember, caught on tape bragging about grabbing women by the pussies. The idea is to reclaim what is a considered a derogatory word and rebrand it as one that empowers women.

Why pink? Pink, a feminine color, stands for “caring, compassion, and love.” And isn’t that what our country needs the most right now?

I want to see your pussyhat! Share a link to a photo of your hat in the comments below. And if you’ll be in Washington, DC this weekend to march, let me know! Perhaps we’ll run into each other 😉

images via The Pussyhat Project